Thank you for your patience while we retrieve your images.

57 photos
The seventh-ranked Virginia Tech wrestling squad used an electric atmosphere to propel it to a 20-12 win over the University of Virginia Saturday night in front of a Cassell Coliseum record 3,378 fans for a wrestling match.

The first three bouts were wild ones as the Hokies won each in dramatic fashion. The match got started at the heavyweight weight class with Tech’s David Marone scoring late to down Jack Danilkowicz, 4-3 and sending the crowd into a frenzy. Danilkowicz picked up a first-period takedown and took a 3-2 lead early in the third period with an escape, but Marone pulled in a takedown attempt with 20 seconds left and held Danilkowicz until the end for the exciting 4-3 win. 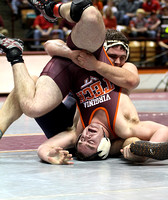